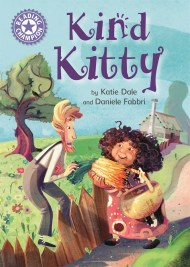 This story is part of Reading Champion, a series carefully linked to book bands to encourage independent reading skills, developed with Dr Sue Bodman and…