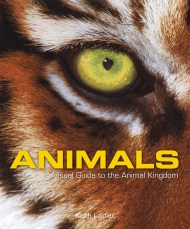 From sponges to spiny ant eaters, brine shrimps to bonobos, Animals allows you to witness some of the most astonishing wonders of the natural world…